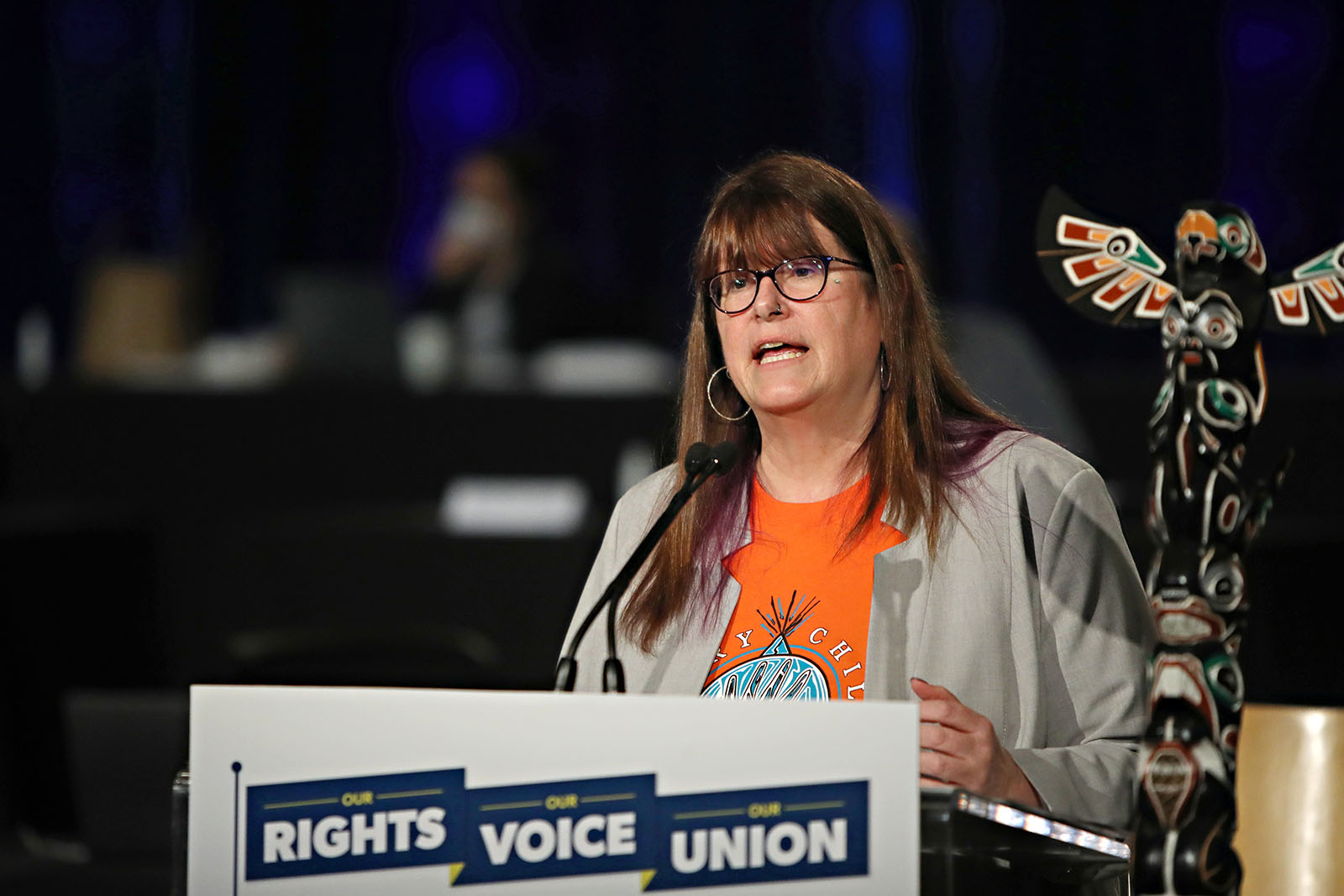 Vancouver, BC (Coast Salish Territories)-The BCGEU emerged from its 51st triennial constitutional convention on Saturday, June 12th with a new name, an ambitious agenda for the next three years, and Stephanie Smith acclaimed to lead the union's 82,000 members as president for a third term.

In addition to president, delegates elected five other members of the 2021-2024 executive committee. Treasurer Paul Finch was re-elected by acclamation to a third term. Three incumbent executive vice presidents (EVPs)-James Coccola, Doug Kinna, and Kari Michaels-were re-elected and Judy Phipps will be joining the executive committee as a new EVP.

"Virtual or not, every BCGEU convention is a powerful opportunity for members to choose their union's priorities and leadership," said Smith. "I'm honoured and humbled by the continued support of delegates and I'm excited to get back to work as part of this incredible executive team for the next three years."

In her presidential report to the delegation, Smith highlighted the union's accomplishments since the last convention in 2017 and summed up her vision for the BCGEU's role in BC's pandemic recovery, "Our union can and should be front and centre in building a renewed economy and revitalized communities based on an inclusive social vision, progressive policies, aggressive public investment, and a robust and comprehensive system of public services. We won't settle for anything less."

Addressing delegates at an all-candidate meeting prior to her re-election, Smith said, "Before 2020, if anyone had asked me if I wanted to lead the BCGEU's 82,000-plus members through a global pandemic that would jeopardize their health, safety, rights, and livelihoods, I'm not sure I would've said yes. But 16 months in, I can't imagine anything I'd rather do than work on behalf of these members who work so hard on behalf of British Columbians."

Before electing their 2021-2024 executive committee, delegates debated and passed dozens of resolutions to guide their union's work over the next three years. The resolutions passed covered a range of issues including:

· Enhancing worker health and safety by preventing violence in the workplace and expanding mental health supports and services;

· Making the BCGEU a more diverse, inclusive, and equitable union by changing the union's name and creating an equity EVP position, as well as creating opportunities for IBPOC and gender-diverse members and activists at all levels of leadership; and,

· Expressing solidarity with activists in other countries including farmers and their supporters in India, anti-austerity protesters in Colombia, and human rights defenders in occupied Kurdistan.

In addition to elections and debates, the convention's 492 registered delegates heard speeches and greetings from leading voices in the labour and progressive political movements including Spirit of Leadership Award winner Dr. Cindy Blackstock; BC premier John Horgan, federal NDP Leader Jagmeet Singh, BC Federation of Labour president Laird Cronk, BC Federation of Labour Secretary-Treasurer Sussanne Skidmore, and others.

The BCGEU is BC's most dynamic, diverse, and fastest growing union-representing more than 82,000 members who work in every sector of the economy and live in every community across the province.